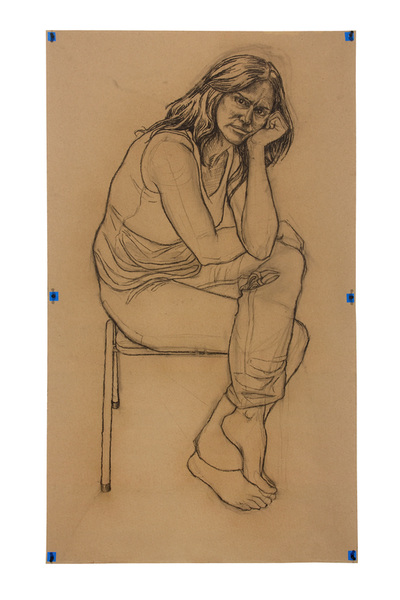 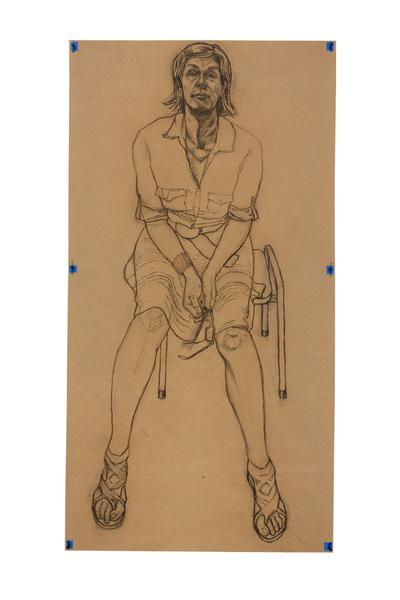 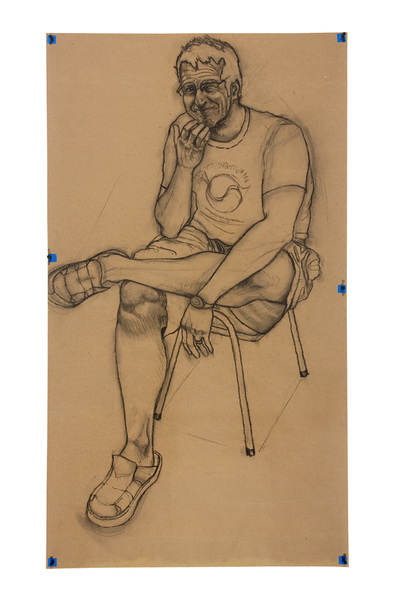 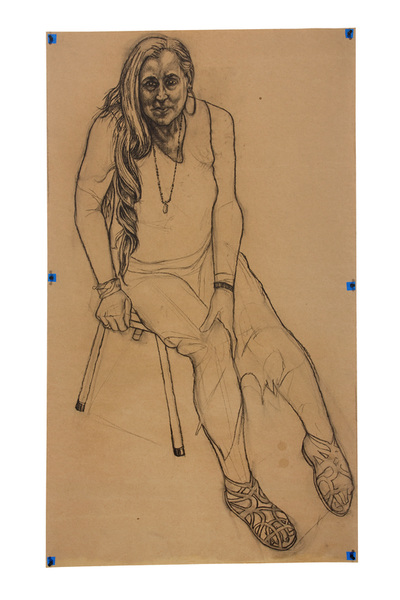 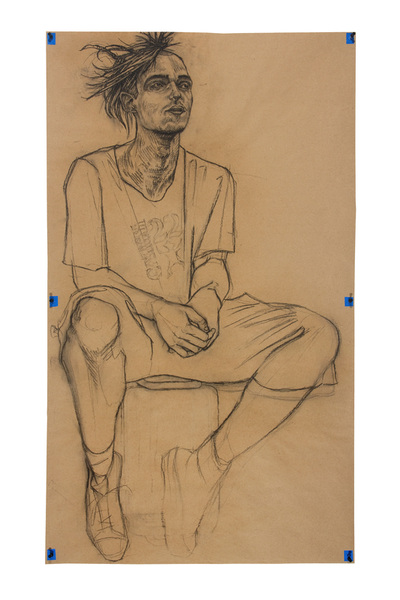 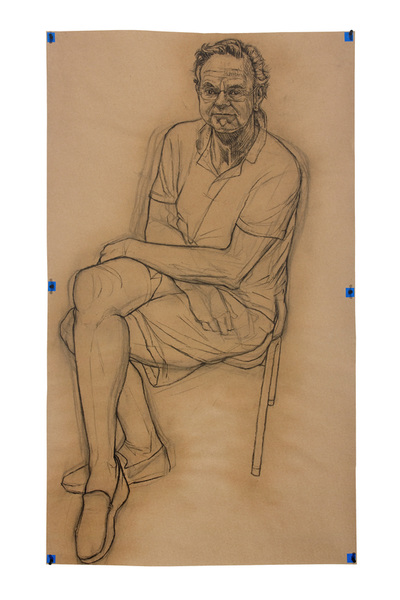 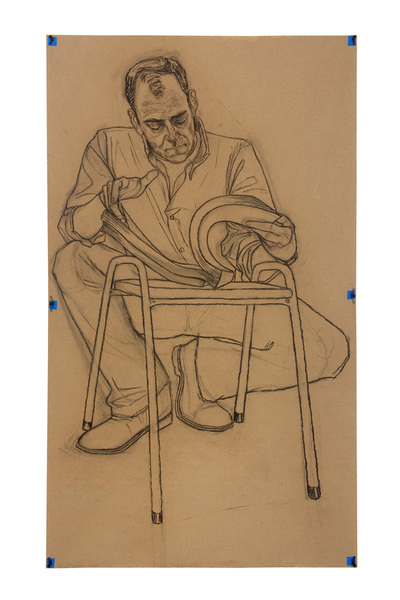 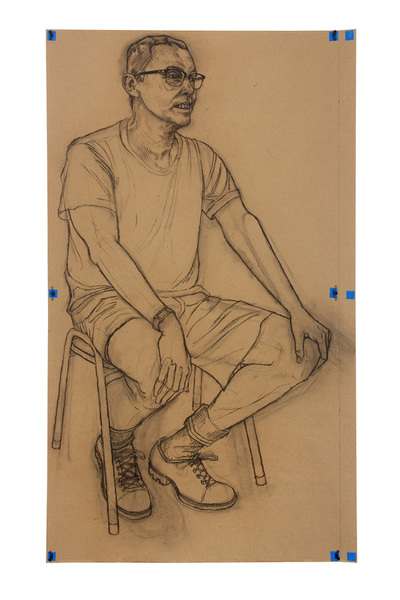 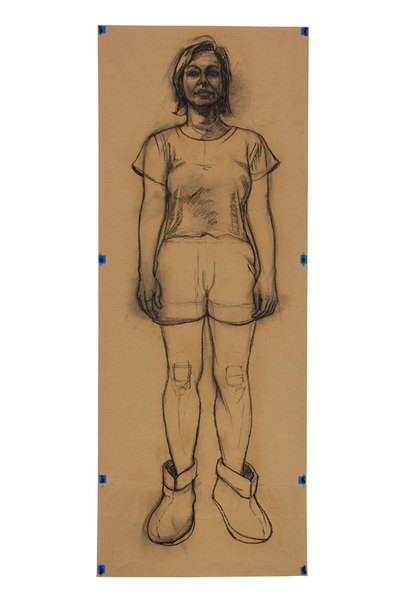 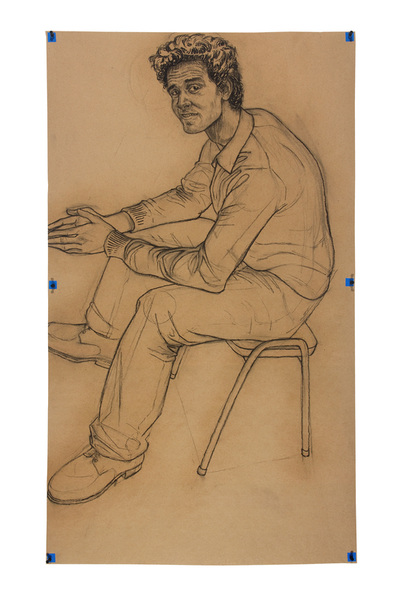 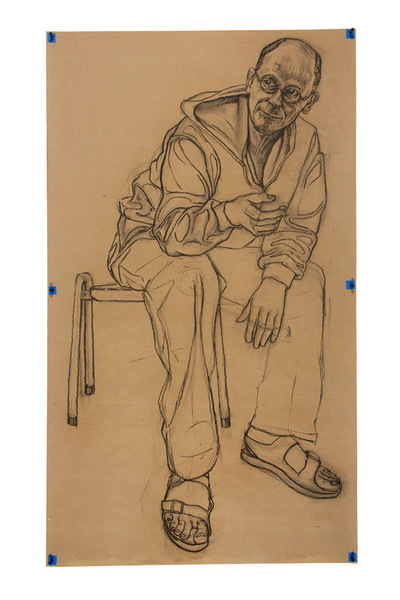 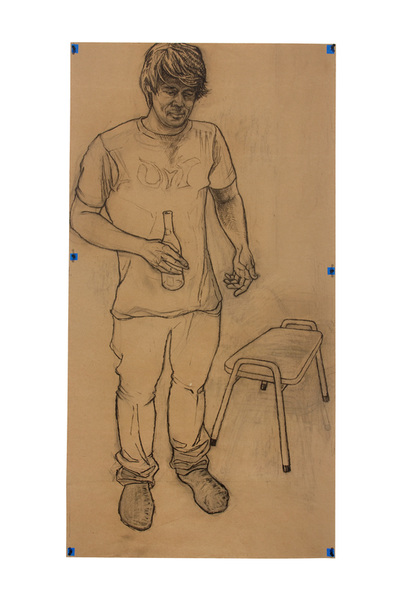 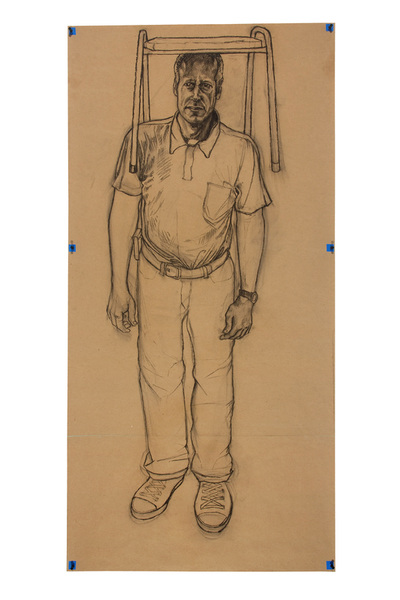 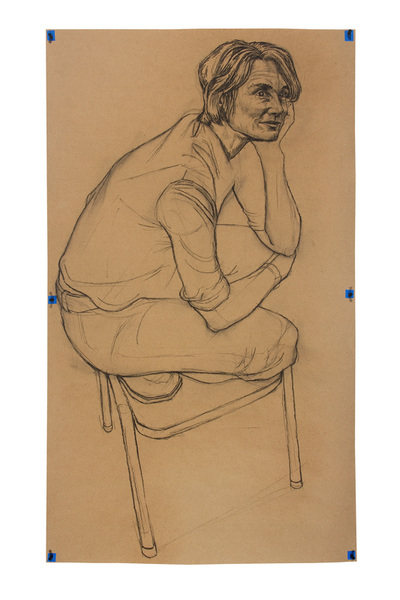 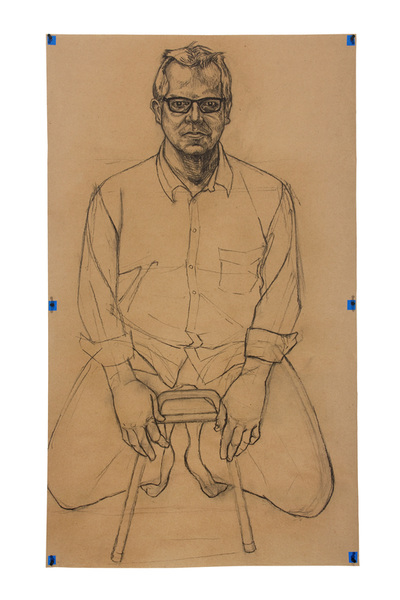 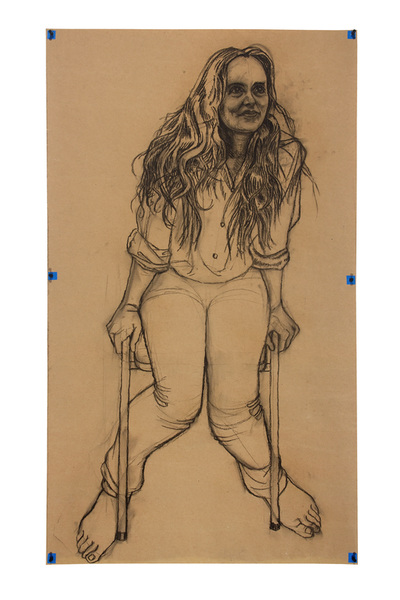 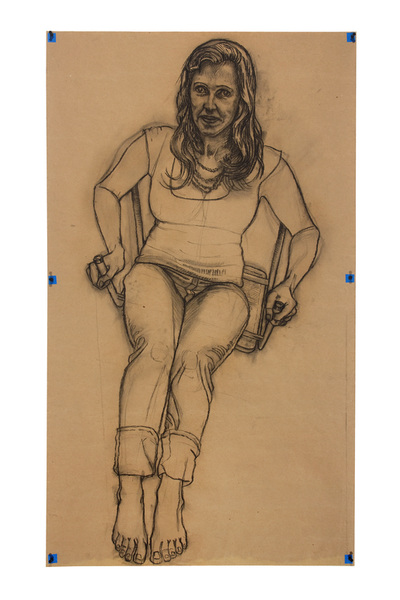 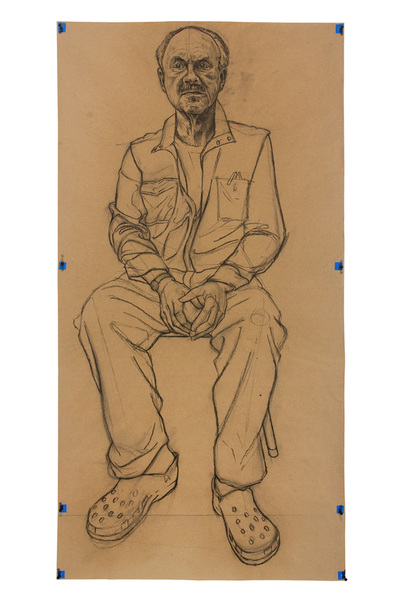 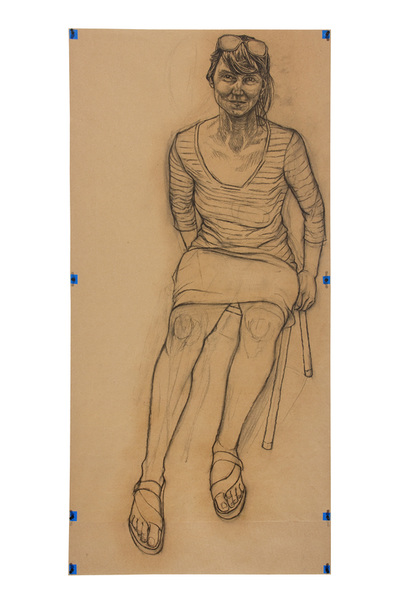 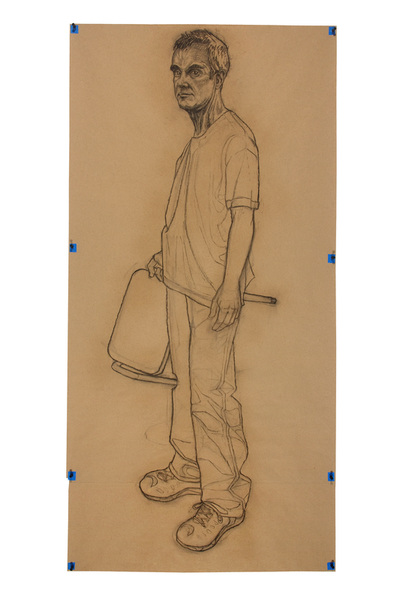 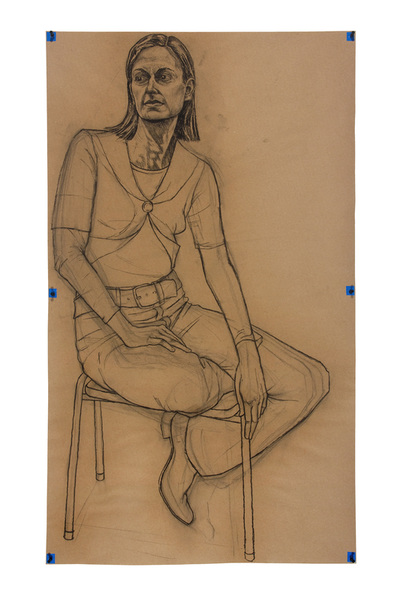 The title for these drawings come from the Kinks song released in 1965. See My Friends was definitely a pop song - but a pop song like I had never heard before. Like many pop songs it’s about love lost but the singer (despite reassuring us that he still has friends playing across the river) sings with a heartache that is almost unbearable. Was this meant to be taken literally (across the Thames?) or metaphorically (across the river dividing life from death). The droning quality of the music and vocals creates a melancholia that is hypnotizing. The song mesmerizes me to this day.

The idea for making drawings of people I know came about not so long ago - but its impetus arrived as a house warming gift - a beautiful book on the work of Jean Auguste Dominique Ingres. Being immersed at the time in the activity of trying to make abstract paintings, Ingres wasn't at the top of my list for inspiration. So the book gathered dust, unopened on my coffee table lending an appearance of worldliness to guests and visitors that was completely unearned.

After an exhibition of my paintings in 2009 I felt that I had reached an impasse. The idea of approaching new works in the same manner seemed weighted more with a sense of duty than curiosity. Stumbling through various ideas and directions, I decided that reintroducing the figure into my work might jump start my creative process. That's when I rediscovered the book and the drawings of Ingres. Full figures, portraits, group sittings; these were drawings of great simplicity and immense delicacy. I was drawn to the economy of Ingres’ drawings which (to me) was both contemporary and traditional at the same time. Newly enthused, I went back to square one and returned to the simple act of drawing through observation. I began by sketching myself and when that became boring I proceeded to ask others if I could draw them - full figured (almost life size) and drawn with charcoal on homely brown craft paper.

The Irish novelist John Banville has said when he hears the word "psychology" in relation to the novel he reaches for his revolver. He insists that things are what they appear to be on the surface. To ask what they mean is to misunderstand them - and he implies, to miss their beauty. Before turning to writing, Banville wanted to be a painter. His paintings were hideous he says, but in making them he learned to look at things closely. Can our insistence of dismissing the obvious as inadequate be mistaken for a laziness of "seeing?" Could we be missing what's right in front of our noses?

In making these drawings it became apparent to me that capturing a likeness wasn't a parlour trick. In my struggle to render a friends appearance, I took the only path I knew to take and hoped not to just capture a likeness but also to possibly give life to the person that lay beneath the surface of my drawing. And only sometimes, if I was lucky and determined to look deep.

With the advent of personal computers, camera phones, and social networking people are displaying images of themselves (and others) more than ever before in history. As the speed of sharing information and images increase can the time needed for “looking closely” still exist?  Parts of our brain are dedicated to the recognition of faces and the deciphering of expressions - but can this onslaught of photographs becomes overwhelming, blurring everyone and everything together at the cost of clarity?

Finally, what does the song See My Friends have to do with these drawings? Now in the fifth decade of my life, the friends that I do see live all over the world. Some have crossed over that river into the unknown. Without a photographic record, they can only be seen in memory. These drawings are as much about my attempts to see my friends as to how they actually may be. These drawings are an effort to record these people, as honestly as my abilities allowed, in this place and at this time - for myself, for posterity and for the friends and loved ones of those who let me try.